Overcome Obstacles Instead of Being Overcome by Them 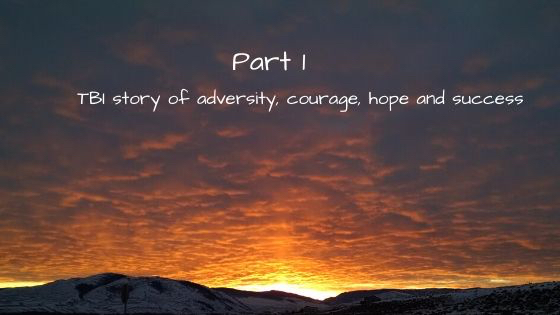 Overcome Obstacles Instead of Being Overcome by Them

A  4-part story of adversity, courage, hope and success for one TBI survivor

This is one of a four-part series of how one traumatic brain injury (TBI) survivor overcame obstacles to improve her quality of life when appropriate resources seemed out of reach.  These obstacles and challenges associated with TBI survivors include many skills associated with execution functions of the brain.  These skilled functions can be thought of as the command center of the brain that controls the cognitive processes such as decision-making, impulse control, attention, emotional regulation, and working memory.

Here is the first part of her story.

Healing is a continual process, but for this TBI Survivor, I made a choice to overcome obstacles instead of being overcome by them. Do not get me wrong, there have been, and still are some tough days, but with determination and a willingness to change, anything is possible.

Over eleven years ago, my life drastically changed on a fall day as I was driving to Steamboat Springs, Colorado in a snowstorm for a class.  We all know how Colorado weather can be; sunny one minute, a few miles down the road and a few minutes later, a complete whiteout has greeted you with full force. As I was making the final turn toward the West Summit of Rabbit Ears Pass, I noticed a vehicle fish-tailing on their side of the road and decided to pull as far right on the shoulder as I could hoping the car would pass, I could make a sarcastic comment about their driving, then be back on the way to class.

I did not make it to class but, I did survive a head-on collision with the side of the other driver’s vehicle.  Not only was life as I knew it changed but my ambitions for my career were crushed as well.

Well, I went from being a semi-respected member of the community to the town joke.

Memory, balance, speech, processing, and cognitive issues made me different; insignificant in the minds of many who, instead of trying to understand the abrupt challenges in my life, people chose to judge and diagnose me to be someone I was not.  I lost friends, family members had no idea how to deal with me or communicate with me so, it was just easier for them to write me off as a “freak”.  People I called friends called me, “different, odd, awkward, and consistently inconsistent”.  Great on the self-esteem, I tell you (sarcastically speaking).

There were limited resources within the community I lived and the husband at the time, scared the crap out of me when he drove me to and from doctor appointments and surgeries. It took me over a year to get behind the wheel again.The marriage did not survive, but my mild traumatic brain injury was not the only reason.

Do you know what it is like to walk into the store or post office and see people whisper into one another’s ear while looking at you from the corner of their eye? Nah, they were definitely not talking about me, and they were so secretive, I had not noticed. Right…

I apparently hired a lawyer to represent my best interests but I don’t recall signing the paperwork, but when it was all said and done, I was hurt in the accident so they could benefit from my pain and suffering.  On one of the few encounters I remember with the lawyer’s Junior Associate (my mood swings and emotional dysregulation were too much for the real lawyer), it was mentioned that I should lose my home, be broke, and accept that I would never have worth-while employment for the rest of my life.

I guess if I had bought into what they were selling, they would have gotten more of my settlement, and they got most of it. That was just enough motivation for me to realize I did not want to be the person they decided I was going to be.  Boy, did I make a few sharks angry.  Who cares about what their words did to my self-esteem?

One afternoon a year-and-a-half after my accident, I sat at my kitchen table in despair, crying, and thought I could not live the way I had being living anymore. I was afraid to drive, the help I was getting was minimal, and the then husband was about as available as a live operator in a computer-operated call center. I was ready to give up and had grown resigned to the idea of my disappointing new life, trying to find acceptance of my circumstances even though I struggled to accept the new me.

It was tough because I could still remember how I use to be, I just did not know how to reach that person.  We had been permanently disconnected. I sat at that kitchen table and surrendered and prayed.  Something had to give. Does anyone reading this understand where I am coming from or what I am talking about?

If you have anything to share please feel free to reach out to me at www.razcoaching.com  or www. coachingacademics.com. michelle@razcoaching.com Or follow my www.Instagram.com/razcoaching. I do daily mini blogs with tips of inspiration. I post almost every day.  There’s something in there for you that can help you with your focus for the day.

Happiness+Passion+Purpose – a step by step guide on how to nourish the patterns of your life into the job you will love and land it!